This is just white cheddar popcorn but I served it in a clear bowl with Olaf’s face draw on with permanent marker.  I decided to draw faces on the cups too.

You could also serve vanilla pudding in the clear cups/bowl for the same effect. These were a hit!   I used the BIG pretzels sticks and used candy melts to cover them and then sprinkled on blue sugar crystals.   Everyone loved them! Do you want to build a Snowman Donuts

For these you will need: 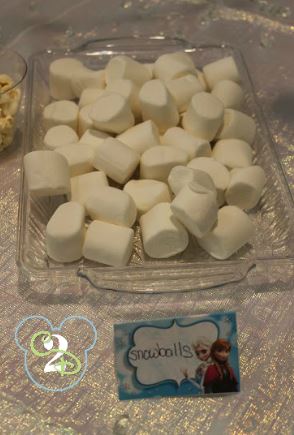 I had some leftover marshmallows from the Snowcap punch so I tossed them on a tray and called them Snowballs.  What kid doesn’t like marshmallows? Carrot sticks with ranch dressing.  The kids really (surprisingly) ate this up! 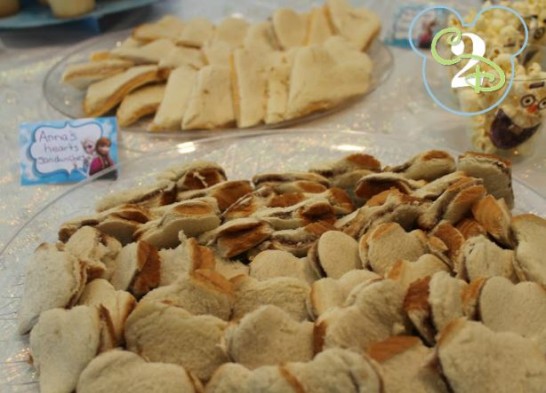 Representative of Anna’s frozen heart in the movie.  I made PB&J and Ham and Cheese.  They were easy enough to cut into hearts with a heart sandwich cutter. 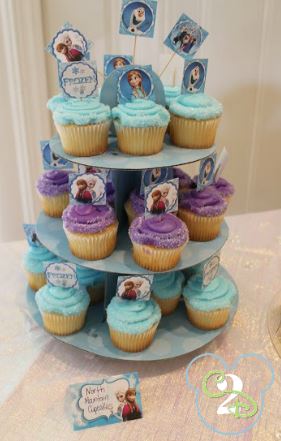 The cupcakes themselves came from the Walmart bakery.  I think they did a great job on the colors.   They even added the white sugar crystals.

With a simple three tiered cupcake stand  I turned them in North Mountain Cupcakes (get it?  Because they look like a mountain?) 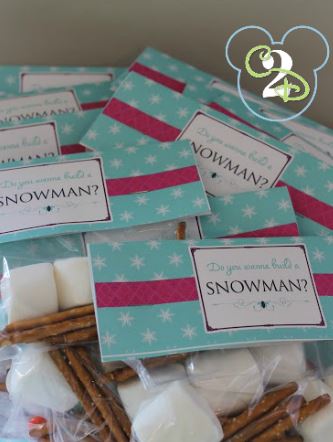 For goodie bags we filled them with extras from the party foods – Jumbo Marshmallows, mini-chocolate chips, pretzel sticks and M&Ms – for Snowman parts.

All the printables for the party came from Etsy.  I love Etsy!

There you go, my 9 best party food ideas for YOUR Frozen party!

Have you had a Frozen party?  I’d love to hear your ideas or see your pictures!